The Liberty Pyramid: The Founders' Framework 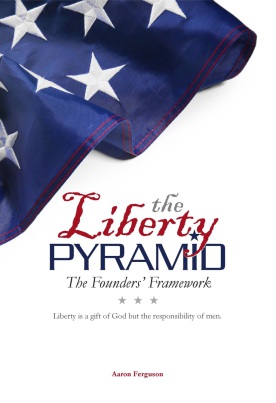 Liberty is what all people have prized yet so few have possessed. But why? If every person in history has desired freedom, then why have so few had the opportunity to enjoy it? What about liberty is so elusive?

Why did liberty find a home in America? What secrets did our forefathers discover that escaped others before them?

What liberty lessons have been forgotten today? Can liberty last forever?

These questions are answered in Aaron's new book The Liberty Pyramid: The Founders' Framework. After teaching America's Christian history and government for more than 25 years, Aaron reminds Americans what God has done in the founding of this great country.

Every Christian needs to read this book! The Liberty Pyramid re-identifies and reaffirms the true meaning, origin, and supports of liberty.

Liberty Is a Gift of God but the Responsibility of Men

This idea that "liberty is a gift of God but the responsibility of men" summarizes The Liberty Pyramid and the establishment of America's constitutional republic.

Our forefathers expressed this principle in two of our founding documents -- the Declaration of Independence and the Constitution of the United States. In the second paragraph of the Declaration, they laid out five self-evident truths. In the second truth, they explained that our rights -- one of which is liberty -- were endowed by our Creator, which was their way of saying, "Liberty is a gift of God." But, what follows is our responsibility to protect and sustain liberty. They wrote in the fourth truth, "That to secure these rights (i.e. liberty), governments are instituted among men, deriving their just powers from the consent of the governed." In other words, while liberty is a gift of God, He has left the responsibility to protect and sustain it to us.

In the Preamble of the Constitution, the Framers wrote, "We the people... in order to secure the blessings of liberty to ourselves and our posterity... do ordain and establish this Constitution..." Having already acknowledged in the Declaration that liberty is an endowment by God to all people, the Founders established a form of government -- a Christian constitutional federal republic -- to protect and sustain liberty. Once again, liberty is a gift of God but the responsibility of men.

Liberty is not a gift of government. Government exists to protect our liberty, not to prohibit it. However, the form of government that our Founders established is so unique and unprecedented that it requires several supports to sustain it. Those supports are explained in The Liberty Pyramid. 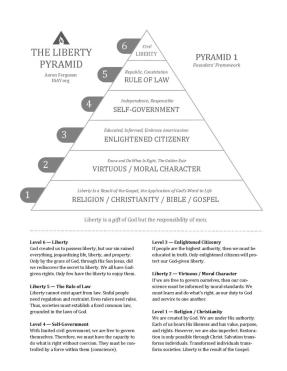 Fabian Socialism
America's slow fade into socialism has been intentional, but who is behind it?
05 Fabian Socialism.pdf
Adobe Acrobat document [432.6 KB]

The Second Wave
While Marxists use an age-old strategy of "divide and conquer," most Americans are unaware.
07 The Second Wave.pdf
Adobe Acrobat document [143.4 KB]

The Study Guide and Daily Reflections have a new look! They are now in book format. Order your copies today.

Simply open your favorite browser (i.e. Safari on iPhone), type in BiAY.org, and pull up the website.

Then, click the "Share" button at the bottom of your screen (page with arrow pointing up on iPhone). Next, click "Add to Home Screen." Now, you have a link on your phone to all the BiAY study tools!

"Bible-in-a-Year was so rewarding! Before BiAY, I didn't have a consistent quiet time and couldn't figure out what to study, but the BiAY

opened my eyes to the extraordinary wealth of God's Word. Now, I can't put it down! Thanks BiAY!"﻿